On the Divine Coast there are so many enchanting spots where you can do snorkeling and diving or just swim and relax on the beach. The best of them are so great because hardly reachable and unknown by the tourists. We have chosen a few of them, thinking they are worth a visit.

Below you will find beaches, inlets and caves split by area. During the excursion with a private boat and local skipper, you will visit the spots you have previously agreed to see.

The name comes from an old iron gate that allowed access. It is occasionally frequented by holiday makers who swim or come here by paddle boat from the nearby Marina di Vietri. It is also called the Beach Marunnella because of the church of the Madonna of the Arch.

This beautiful stretch of sand, mixed with pebbles more than eighty feet long, is called “The Scoglione” because of the large rock that emerges from the water. This is the favourite spot for kids who come here to play.

This is a small beach of pebbles surrounded by cliffs and is 35 meters long. Given to its small size, it is reached by swimmers on pedal boats, canoes or small boats. It is called beach of the straws for the abundant presence of these plants that grow right above it. For some fishermen it is also known as “Marianna Beach“, which is the first name of the original owner of the house that was located on the top of the beach.

The name comes from a big iron bar that was here. This beach is almost 50 meters long and has small pebbles on one side of the pier and larger stones on the opposite side. It is easily reachable by swimmers with small boats that leave the nearby beach “Lannio”. Besides, the short cliff borders the little bay and there is also a small natural pool which is always good for children.

It is a small pebbles beach reachable by sea. Just above the right side of the beach a huge rock, called the ‘”Big Man” emerges.

Immediately in front of it there are two rocks. Ideal for snorkelling due to the presence of a rich marine life, the beach is quite big so there is enough room for a fair number of swimmers as well.

From Cetara to Amalfi
Spiaggetta degli innamorati (the lovers’ beach)

Surely one of the smallest beaches of the Amalfi Coast, it is a pebble beach nestled on three sides of steep cliffs. Sloping gradually down due to the action of the sea, nevertheless stands year after year, almost rebelling against a fate that would like to see it sink into the sea. Just six meters long, it can accommodate not more than three or four people. The romantic name is due to the fact that couples usually get there for “a bit of romance”.

The beach was named after an old farmhouse which was located above it. It lies into the bottom of a tiny cove where thick lemon trees dominate the entire frame. The cove is winded by the breeze of the west, which is appreciated especially during the windiest days.

A small rocky cave on which the majestic Cerniola tower stands. The tower was built in the mid-500. The cave is often reached by pedal boat from the nearby beach Erchie.

This is a very impressive as it is located at the bottom of a broad bay and also because it is the first beach (after passing Erchie) that is only accessible by sea with private boats. Here the water is always clean.

From Salicerchie beach (on the right side of the bay) you can swim to the small cave Suffregna (sulfur) that is located at the end of a rock, out of a gush of water, sulfur and magnesium.

Leaving off the town of Minori, after a coastline area called Mormorata and just before the small promontory on which the Tower of Scarpariello stands, there is a stretch of coast called Carusiello. Here you can find a very small beach (about six meters wide) that can only be accessed by sea. It is located down a narrow inlet and is oriented to the East.

After the small promontory of the Tower of Scarpariello, you will find this small beach. It can be reached only by sea. Except in cases of south-west or south wind, the beach is sheltered and offers very clear water. The name comes from the submerged rocks that crop up almost in front of you. Please note that it dangerous if you come here with a low boat.

From Amalfi to Positano
Le Marinelle

This beach is invisible from the ground and reachable only by sea. With a backdrop adorned with various rocks emerging from the water and protected by sheer cliffs, the beach has no facilities and is sparsely attended. Ideal for relax.

A small pebble beach only twenty meters wide. A sign warns that bathing is officially prohibited due to danger of landslide of the cliff behind it and for the same reason it is not cared for. This small beach is still often used to escape the large crowded beaches of Marina di Conca. The water is generally very clean.

After passing the Cape of Conca, there is a beautiful bay where boats often stop for swimmers and divers to take advantage of the clarity of its water and the shallow depth of its seabed. Behind the cliff, almost vertically, in an area called o’Runghetiello, there are two little-known beaches that are neither visible nor accessible from the ground. The first is about 8 meters wide and is the smaller one. It is rarely used by paddlers or boaters.

Very close to the first beach, the second beach Runghetiello is much larger and you will probably find some visitors coming with a small boat or canoe. An uniform background of small pebbles and very clear water. It is located within the beautiful bay of Capo di Conca and is ideal for relaxing. On the right of it, you can reach small semi-submerged caves.

You can admire the landscape from the road bridge, but if you come from the sea you will enjoy an amazing view. Take a swim into the water of this fjord, which is accessed via a staircase that leads down to the rocks of the beach. It is mostly frequented at midday when the sun is high. The water is generally very clean. Given the limited penetration of the sun, this place gives a great sense of coolness.

This small, cozy pebbles beach is located about one kilometer away from the fjord of Furore (just 450 meters before turning to Marina di Praia). It has a quadrangular shape and has clear water. it is a unknown because it is not reachable by land and not so visible by sea.

Tower of Fornillo is one of the most unique towers. It was built in the sixteenth century, and it now takes its name from the Swiss Count Gilbert Clavel who was a writer and playwright. He bought it and restored it early last century. The beach below is 35 meters long and is bounded by two rock formations that protrude into the sea. It has a uniform background of small pebbles and overlooks a pond that is always very clean and thanks to its picturesque setting, it is really worth a visit.

Almost invisible from the sea and land, this small beach is a few meters wide and it was formed in a recess in the rocky cliff, near the tip of St. Elias. It is made of fairly uniform pebbles and overlooks a generally clean sea. The beach is rarely approached due to its very small size. It is sunny only from late morning to early afternoon.

This is a slight strip of pebble inside a semicircular rock. This small beach is accessible only by sea. It is not very suitable for swimming because of its small size, however those wishing to take a quick stop and swim in quiet clear waters can do so.

At the bottom of the great arch of Jeranto there is the last beach on the Amalfi Coast. Access to it is limited. It is only reachable with special license even because it is surrounded by a wall from prone to landslide. In front of the beach there are several reefs which make it difficult for boats to approach it.

It is a small pebbles beach reachable by sea. Just above the right side of the beach, a huge rock called the ‘”Big Man” emerges.

Immediately in front of it there are two rocks. This is ideal for snorkelling due to the presence of a rich marine life. The beach is quite big so there is enough room for a fair number of swimmers.

Guided Tours will be arranged by boat and personal skipper and itinerary will be personalized on request.

Pick up and drop off by boat at any deck.
Transfers available from any hotels from/to the agreed location. 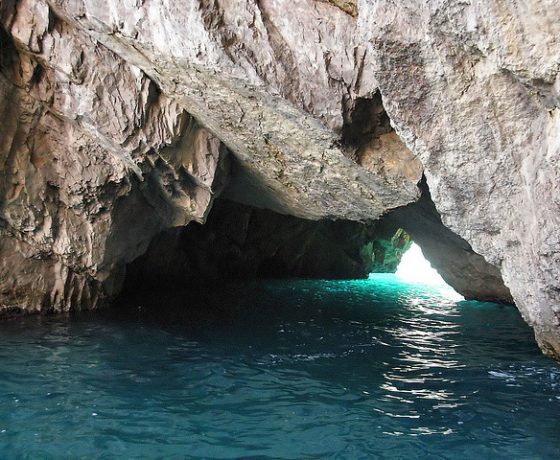 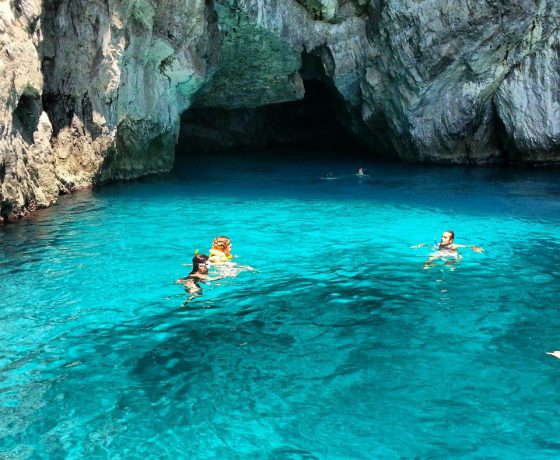 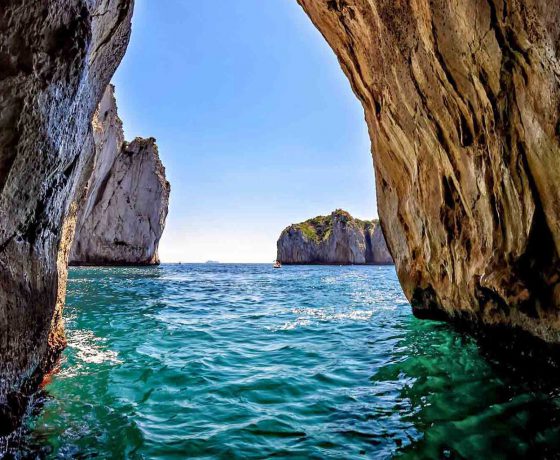 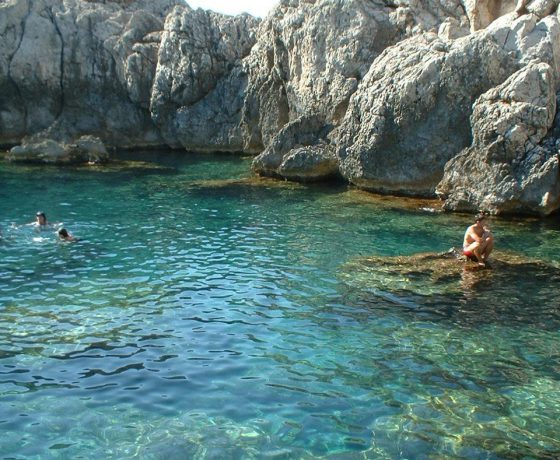 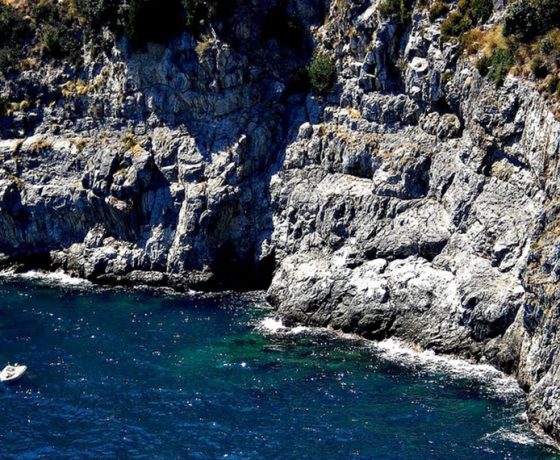 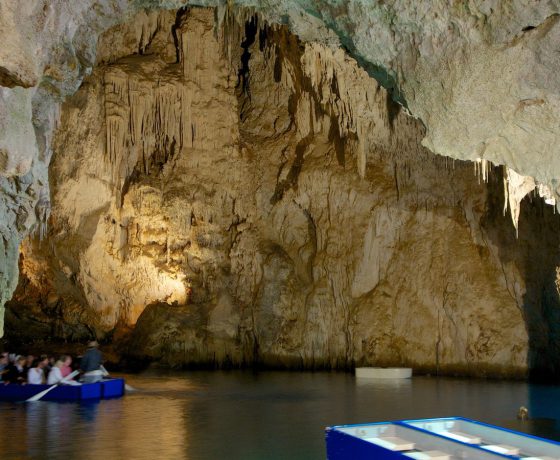 Booking for Inlets and Caves of the Coast